My Portrait of Jaycee Lee Dugard 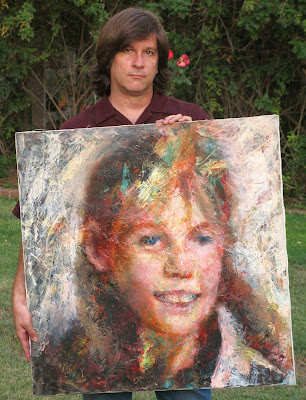 [Artist John paul Thornton with his 1991 portrait of Jaycee Lee Dugard, who was safely recovered in August 2009, after eighteen years]

Thornton painted Jaycee in 1991 after receiving a mailer bearing her photo and a plea: "Have You Seen Me?" At the time, she was 11-years-old and was the subject of an urgent police hunt.

"I feared that the media attention would be fleeting but her story seemed so emotionally gripping," says Thornton, an artist and school teacher. "I kept the mailer and painted a large portrait of her, hoping to display it as a way to help keep her in the public eye."

Since that time, her painting has been exhibited along with hundreds of portraits of other missing children in public displays designed to spark continued support for families who endure such loss, and to promote education and awareness about the issue. Thornton continued to paint the faces of America's missing children week after week, with the overall collection ever-growing. Still, Jaycee's portrait remained the largest, always playing a central role in the presentations.

Challenged to break through public apathy, Thornton invites viewers by the thousands to cradle a painting of a missing child in their arms, where they may read the story behind each case and hopefully connect to the cause. Such group events have been held at museums and even in front of the White House and The Lincoln Memorial in Washington DC.

Shirley Goins, Executive Director with the Southern California Branch of the National Center for Missing and Exploited Children, helped provide outreach and support to the "Paintings of Hope" project, which led to Thornton meeting some of the young subjects of his paintings after they had been safely recovered. Thornton describes these meetings as "humbling and emotional."

Martha De Perez, curator with the Katalyst Foundation of the Arts, had just launched an exhibition of the missing children paintings at LA ArtShare,gallery in which Jaycee Lee Dugard's portrait occupied the most prominent space in the display. Perez says about the show:

"Thornton's paintings are remarkable because they draw viewers into a subject which is quite terrifying. Yet through the colors and textures of the paint, the warmth and humanity of each child really comes through. The paintings honor the children. They connect to the viewers in ways that police fliers and mailers do not."

Hearing that Jaycee was alive and recovered safely after all these years sent a wave of emotion through Perez, when she saw the story break on television. "Her portrait had just been shown in conjunction with National Missing Children's Day in May of 2009 and I began getting calls and messages from people who had remembered her through the painting. So many prayers and hopes were answered. So many people were touched. The painting did not play in her recovery. But it did something else. For eighteen years, it served as a candle in the darkness, reminding thousands that they should never forget our missing children. The painting represented hope."

In the future, the painting of Jaycee will be displayed along with the words, "Safely Recovered."
Posted by John Paul Thornton at 1:10 AM