A celebration in Mexico carries with it remnants of Aztec pageantry and the belief that blood is the conduit which prayer requires to travel from Earth to the realm of the divine. At the same time it is bound by the Catholic Spanish traditions that wove a tight connection to the Mexican people.

I spent Holy Week in Taxco, a fantastically intact hill town, 200 kilometers south of Mexico City.
Known as a silver mining hot spot, each Semana Santa, the streets take on the air of the Inquisition and it's people partake in one of the most visually and spiritually stunning pageants in all the world. For four days and nights leading up to Easter Sunday, processions of penitentes provide spectacle and assault to pilgrims and visitors.

My traveling party consisted of artists and educators in connection with the Taxco/Canoga Park Sister City International program and the Los Angeles Department of Cultural Affairs. Also joining us was my wife Martina and my three year old daughter, Lorelei. We knew that Semana Santa was a remarkable time to visit Taxco, but coming from an American culture that celebrates Easter with jelly beans and marshmallow bunnies, we were to experience a profound jolt.

Taxco itself is picturesque and charming. There is an intimacy and historic richness that washes over visitors, especially in the main town center, or "zocolo". children frolic. Old men dream on benches and women sell baskets beneath the Baroque church of Santa Prisca. Birds chatter in the trees. After a leisurely stroll we were surprised when the Thursday evening penitente procession entered into the main zocolo as bells rang. 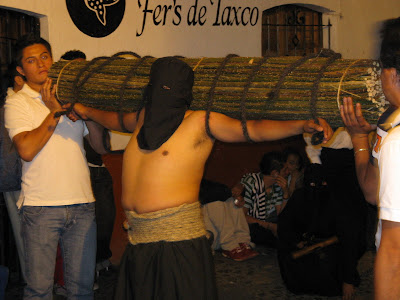 The festive balloon sellers and ice cream vendors gave way to make room for a man naked from the waist up, except for a black hood which hid his face from the gawking crowds. Upon his bare shoulders was strapped a 100 pound bundle of thorny zarza branches, causing him to hold his arms out as if crucified. He was followed by groups of men similarly clad, who carry varnished wooden crosses. At points along the route, they stopped to kneel in the streets and flagellate themselves with barbed whip. Bright crimson blood drips steadily from their fresh wounds. A drummer beats a solemn rhythm and a violin scratches a haunting tune from hell. 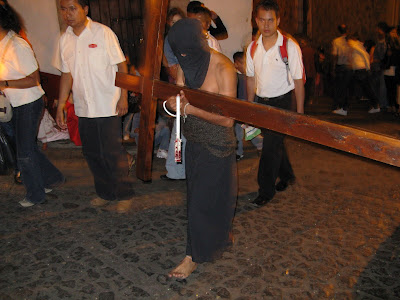 "Oh my god," I hear myself shout. "It's started." All around me, people rush to line the streets, camera cellphones click. The surreal torturous scene from a Goya Painting unfolds before us... 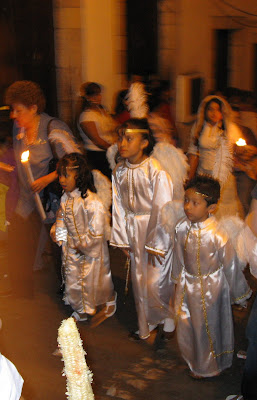 Then a sweet cluster of children in shimmering satin robes climbs the cobblestone street behind them. Feathered angel wings and smiles, they are the peaceful symbols of hope and redemption before the next group in the procession emerges: scampering black shrouded women, stooped over like animals, carrying long luminous candles. Their bare feet are shackled with chains, which jingle as they shuffle. They move in long twin lines down the lanes. 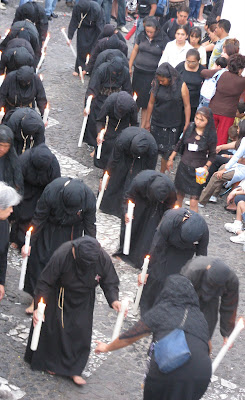 Then, carried aloft on the shoulders of a dozen men, a platform supporting a ten foot tall carved crucifix seems to float by. it is decorated with miner's hats and silver,along with vibrant roses and sun flowers. It is the first of over seventy carved life size crucifixes that I would see that night. More drums, violins, candlelit angels and hooded penitents. More blood. 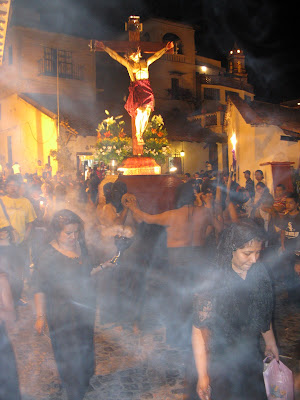 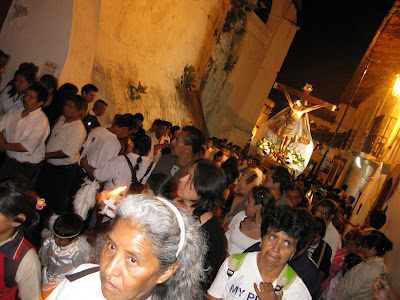 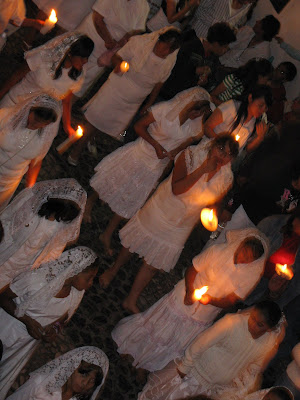 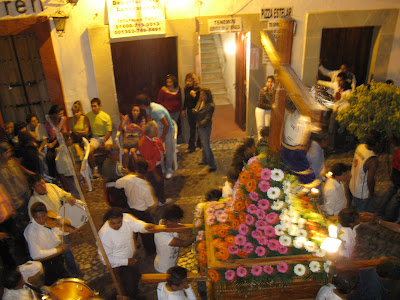 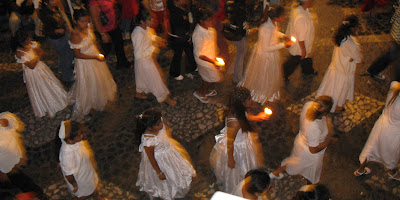 It was the following day, Good Friday, that we were to view the procession of penitents in the early evening daylight. Hundreds of participants reenacted Christ's suffering, either for personal reasons of chastisement , family obligation or pure devotion. 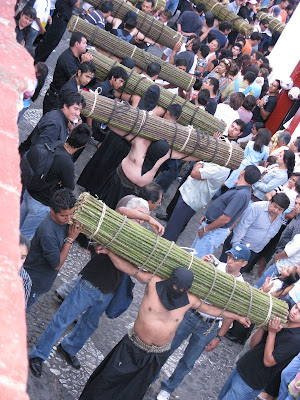 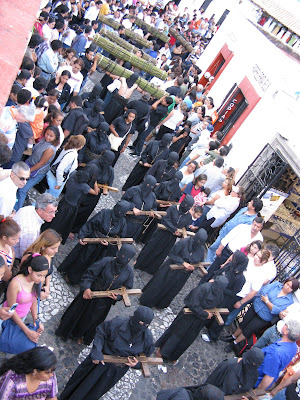 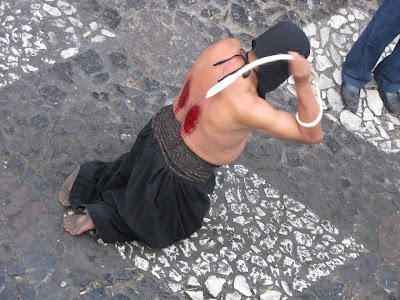 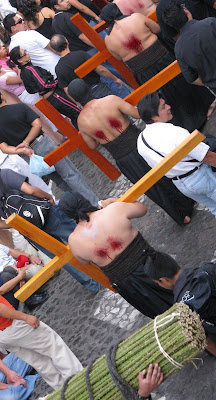 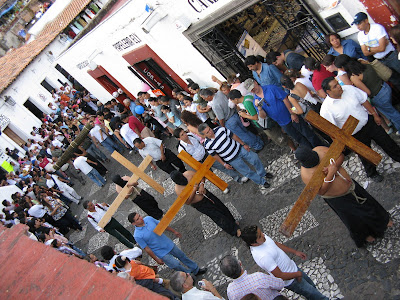 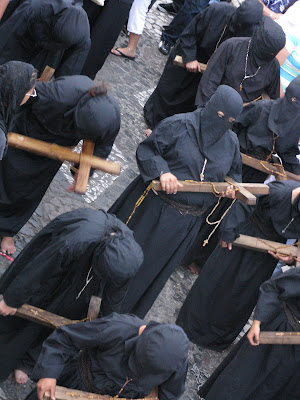 The procession ended with a coffin containing a sculpture representing the dead body of Christ, and finally the Virgin. 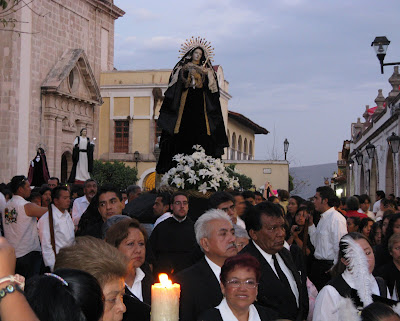 The respect I have for this passionate celebration of suffering and pain is great. The questions of religion, devotion and spirituality that this event evokes have still yet to be processed by my mind and heart. Which ways point to God best?
Posted by John Paul Thornton at 7:50 PM 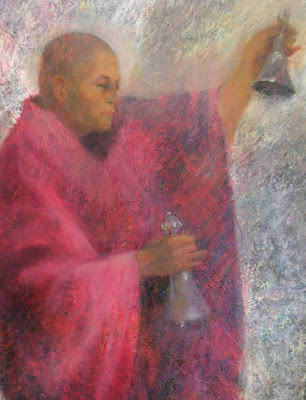 
What does the uprising of Tibetans against the government of China mean to you? Have you been watching the Internet news? Does a crumbling bumper-sticker proclaiming the liberation of Tibet register anymore to anyone? Could anyone be shocked by the new images of sweet Tibetan monks torching businesses ? Could anyone be surprised by the Chinese promises of swift authoritarian response?

Symbolically, it is a struggle of heart and mind. Shall the ability to use violence override the Buddhist core issue of peaceful detachment? Shall the government in Beijing react with the same strategy of force, to crush this rebellion as the world awaits a supposedly enlightened Summer Olympics? The story of the recent violence and demands from both sides may be examined
in this article, along with photos from the Associated Press.


I lived in a Tibetan refugee settlement in Nepal.
Most Tibetans I met with spoke of "the Chinese" as nameless, heartless reapers of unspeakable doom. Can one be a Buddhist and hate? I wondered. Of course, I never asked this question aloud of my new friends and hosts. I was just a guest and I chose to experience the views of the Tibetans without voicing my opinion to them. Tibetans have seen their way of life practically obliterated since 1959.

More recently, I spoke in Beijing, China, where "Tibetans" were referenced the way insensitive Americans might speak dismissively of native "Indians" who now have found their place in the cosmic order, apparently happily running casinos.
"What Tibetans? There aren't any Tibetans", I was told by a a Chinese friend. "The Tibetan region is simply China now", he explained, "The people of the Tibetan culture are so much better off now that there are proper grocery stores and paved roads leading to the formerly isolated plateau. We bring them education and real hope." Again, I chose to listen, as purely as I could, without prejudice. It was hard.

As a traveler, I have always taken what I feel to be a road of reflection rather than exertion.
I have always felt that, as an American, my views on the matter would be wildly simplistic, or meaningless. Of course I would exhort freedom. The thought of what the American government ( and Spanish government ) did to the native cultures on the North American continent becomes more distasteful and incomprehensible each day I grow older. We "root" for justice in the Tibetan region because our own history shows us that the cultures we wiped out in America were more meaningful and reverent than a thousand modern strip malls and Kentucky Fried Chickens could ever be. Why take a pristine Himalayan meadow sprinkled with picturesque stone monasteries and fuck it up with an asphalt parking lot, a disco and a pool hall? Weirdly, we watch as China commits acts of governing that were formerly that of our great great grandfather's. We want it to stop. We know better now, we say.

And again, I ask, is a Tibetan follower of the Buddha allowed to burn buildings? Or can anger and uprising in fact become the highest tools for good? Don't scold me. I am just asking. I am just an American. Would the Buddha sit quietly, cross-legged under his tree? Was he ever required to fend off an army? Would he have? Should he have?

Somehow, in all of us perhaps, in our collective memory or in our present gut, there resides a strange comprehension of steps each party takes to achieve either "freedom" or "Unity". The idea that we are supposed to evolve as a planet is tested when regions live out their own personal genocide stories. Will Tibet stand alone?

Does morality come from an inner pang within our gut, or is it taught to us as a set of selected axioms. Does a person need to be one-sided to be moral? Does being one-sided provide focus, or spiritual sanctity? Does morality mean to stop imagining the world through the eyes and heart of your enemy? I am just wondering.

While working closely with the Tibetan refugee community in Nepal, I created a series of larger than life-sized paintings of monks, each carrying bells. I named this series "The Bell-Ringers". To me, they represent not only archetypes of steadfast courage, but are personal reflections of a few real individuals I had the honor to meet and live with in the settlements. I think that these paintings also convey, in a pictorial sense, the old proverb that speaks of implication, responsible action and the softly creeping realization that 'You cannot un-ring a bell...' The world is watching. The world has video cameras now, along with the internet and YouTube.

You cannot un-ring a bell. 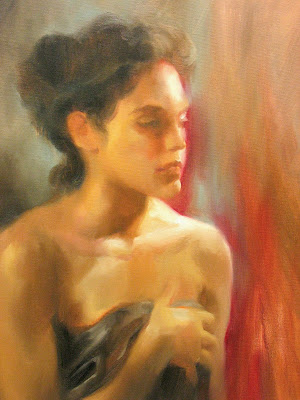 I am honored that my painting "In The Light" will be included in the Amnesty International exhibition, "Presente! Homenaje a la Mujer" at Avenue 50 Studio in Highland Park, Los Angeles.

Here is some information about the exhibition:

The Aliados con Amnesty network of Amnesty International USA (AIUSA) and Avenue 50 Studio present ¡Presente! Homenaje a la Mujer, a group exhibition including nearly 100 artists from the U.S. and around the world. The exhibition includes a variety of 2-D and 3-D art by both male and female artists. The exhibition coincides with International Women’s Day. Its purpose is to celebrate women and to create awareness of AIUSA’s Stop Violence Against Women Campaign.

The Aliados con Amnesty network is a group of young Latino activists engaged in promoting human rights and to inspire activism. Avenue 50 Studio is a non-profit art gallery located in Highland Park that enhances public recognition and appreciation of multicultural art. The exhibition is being organized by three women: Kathy Gallegos, Director of Avenue 50 Studio; Julissa Gómez, AIUSA Field Organizer; and Liliana Herrera, AIUSA Latino Outreach Coordinator. All of whom are passionate about “artivism”, the idea of activism through art.

The show promises to be very expressive and diverse. I will be speaking at the artists talk
Thursday March 13th. 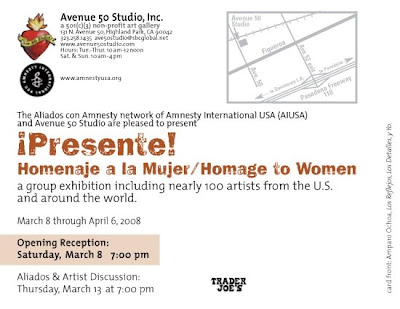 Posted by John Paul Thornton at 12:46 AM