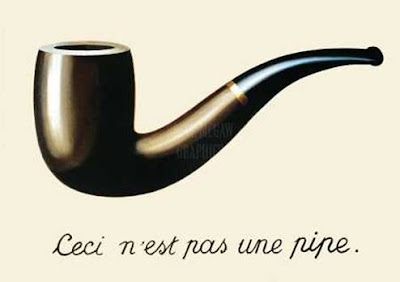 It is delightful to see a major museum dance with glee while they really ought to be squirming with near-apology about an uncomfortable truth.

The Los Angeles County Museum of Art is about to close it’s presentation of the world class exhibition called "Magritte And Contemporary Art- The Treachery of Images.” Hanging as the centerpiece of the exhibition is LACMA's Magritte masterpiece— The Treachery of Images (This Is Not a Pipe), (1929)— described as a seminal painting and popular cultural icon. The show has been the talk of the Los Angeles art scene for the last three months as artists and art-lovers of all ages have been flocking to see the much-applauded spectacle of an art show that is actually fun.

I must admit that for decades I have carried within me a prejudice towards the lovable Belgian painter, who was linked to the Surrealist movement. I always assumed however that an exhibition dedicated to Rene Magritte would be akin to opening up a canister of whipped cream and happily swallowing the frothy desert-topping straight from the nozzle. I thought that it would be like getting a pie in the face by a clown. At least that’s what I was led to believe, thanks to biased art history professors who have presented Magritte and his surreal artworks as mere quirky jokes, or playful one-liners. After viewing this grand show I discovered the real truth: to be confronted by this master’s vast body of art is to be nearly floored by his dedication to a vision that is unique in the world.

Yet, thanks to LACMA, we are not allowed the purity of that true experience.

Magritte is not permitted to stand alone. To great dismay, Magritte’s unerring technical prowess and his iconic manifestations of dream-like imagery are not allowed to speak for themselves. Instead, curator Stephanie Barron has insisted on intermingling derivative artworks by thirty-one other contemporary artists placed along side the Belgian master. Interesting... and uncomfortable.

It goes like this: First we may admire a Magritte original, then we must look at an obviously unoriginal painting by another “famous” artist.

Instead of enjoying Magritte’s vision, we must stomach constant interruptions by other artists who were "inspired" by Magritte. Why? The idea, we must suppose, is to impress us with the notion that these additional artists are spiritually connected to Magritte by their "borrowing" his concepts about text and imagery. The unintended result is that it exposes our "greatest" post-modern artists as not really being all that original or creative. Yikes!

So here's the question: Who had more courage? The surreal originator Rene Magritte, or the often shameless "borrowers" of his images?

Aside from exposing these thirty-one artists, the resulting comparison between Rene Magritte and the "others" produces a weird suspicion that there is either a political agenda or a down-right fear of purity afoot. It feels like LACMA is grafting these "others" onto Magritte's legacy in a forced way. Remember the film Forrest Gump, where through artificial computer enhancement, Gump appears at great moments in history?
"Look! There's Forrest with Kennedy!"
"Look! There's Forrest with John Lennon!"
"Look! There's Jeff Koons doing Magritte!"

This juxtaposing is interesting but annoying. Imagine trying to savor the main course at an outstanding restaurant while bus-boys flick greasy french fries at your mouth. Imagine watching a classic movie chopped up with dumb commercial breaks trying to sell you cheap tie-in products. That is how a visit to Magritte and Contemporary Art: A Treachery Of Images felt to me.

I had the chance to attend the gala opening of this show, as well as to visit again on two separate mornings. On all occasions, crowds packed the spacious galleries and families frolicked among the artworks in a Disney-like atmosphere. The Los Angeles County museum went all-out to suggest the topsy-turvy world of surrealism by encouraging artist John Baldessari to design a zany environment by which to unify the show, while reflecting Magritte's imagery. Baldessari does so by installing a vast carpet on the floor that resembles a cloud-filled sky. Look up at the ceiling, and visitors will see wallpaper murals of a cityscape strangled by endless freeway intersections. In other words, down is up and up is down.

Chattering groups of school children love this cartoon dreamworld while even jaded art-aficionados smirk at its cuteness. It is a pleasure to experience a presentation that playfully draws viewers in to a make-believe art-land. Yet at the same time, it seemed that the curators and LACMA were uncomfortable about simply showing Magritte’s art. Our attention-deficit disorder world has officially gripped block-buster museum shows as well. Did the designers feel they had to distract us ? Did they feel that we had to experience his work in the context of a visual joke? This was not necessary. Having to throw in unoriginal knock-offs by additional “serious” contemporary artists as a way to justify the appreciation of Magritte’s work just wasn’t necessary either.

By the way, Magritte kicks ass. Actually, what was most enjoyable about my visits was watching crowds of art-lovers face this uncomfortable truth. Fellow museum-goers first confront the star of the show, Rene Magritte, and then turn to view the decidedly rip-off work by comparably stuffy Andy Warhol, Jasper Johns and company. I watched as art fans “In the know” approached the interspersed contemporary artists with gleaming smiles of anticipation. Yet, after summing up the inferior work they always seemed to shuffle away looking disappointed. (Or enlightened). Any illusion that their favorite contemporary post-modern hero could hold up against Rene Magritte was shattered. Meanwhile, visitors who obviously didn't give a hoot about art pedigree joyfully passed by the intermingled contemporary artworks as if they were invisible to the eye. There has rarely been a more magical example of The Emperor's New Clothes in action.

Academic museum goers bent upon distancing themselves from the sheer appreciation of painting as an art form in order to wallow in conceptualization could not escape the fact that Magritte knew his shit.

“Jesus, he could really paint” whispered countless viewers, many of them hissing their words.
Exemplary technique was still considered the mark of a loser during the last two decades of Magritte’s life. Still, he bravely painted and designed with a care and mastery that could possibly rival Albrect Durer, the great German Renaissance painter. Just to prove that Magritte was not a noodling, conservative commercial artist, the LACMA Museum show also features a series of his paintings that were executed in a purposefully god-awful manner. (Magritte decided for a time to try painting bad on purpose). Called the vache series, (vache meaning cow, or ugly). They could be some of the stupidest artworks ever made, but they were his original stupid artworks, created before the age of irony. They were “lame” long before lame paintings became the calculated fashion.

Since they didn’t sell well in galleries, he cheerfully abandoned “bad Painting” and went back to painting in his true voice. After all, it seems he could paint any way he wanted to.

You can read about the psychological ramifications of Magritte's imagery elsewhere. There is an intensity to Magritte’s paintings that is stunning. They are far more than whimsical. The deliberate exploration of concept and careful construction of his layouts suggests a passion and sureness that all painters secretly yearn for…

Image after image rings with familiarity and we realize how much his “look” has been used by current advertising, design and music video production. If the connection with a society has anything to do with the success of an artist, (and it does), then Magritte has achieved a success of great proportions, out stepping almost anyone who ever picked up a brush.

Of course, the genius of Magritte was actually prophesied by the most unlikely of painters decades earlier in the year 1902. Arch neo-classical academic realist painter Jean-Leon Gerome was famous for his serious depictions of polished Greek and Roman figures, but was also the cool punster behind this little known painting titled "O pti Cien". 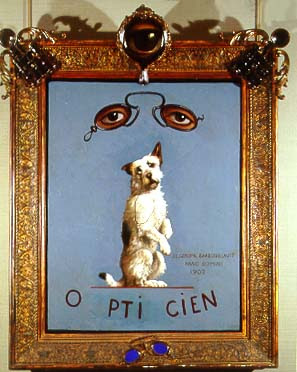 A play on the words "Optician" ( eye specialist) and "Oh, Petit Cien" (Little Dog) , It stands historically as one of the first artworks to rely upon text and visual word play. It also includes the use of funky found objects. Nineteenth century master Jean Leon Gerome and twentieth century Surrealist Rene Magritte could have almost been drinking buddies...