Leaving the Cake Out in the Rain 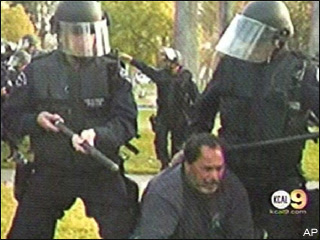 "Listen babe, you've got to do something with that imposing helmet. Oh, and It just doesn't convey friendliness when you're ramming a pole into the scapullas of the elderly..."

The month of May in Los Angeles began with a May Day Immigrants rights march in MacArthur Park which left a shameful stain on the LA Police Department. When a line of riot-gear clad police with batons began shooting rubber projectiles at fleeing crowds while smashing cameras of reporters, they appeared to be oblivious to the number one law of public relations in our media-savvy world:
"Never do anything that you would not feel proud of were it broadcast on television."

A month later, hundreds of emerging home videos, cell-phone videos and network broadcast videos have made it clear that the police tactics were grossly heavy-handed, misdirected and shockingly offensive.

Besides that, it all LOOKS bad from...a public-relations standpoint.

If you want to read about the politics of immigration, the theories of impending fascism, or the nasty results of police Chief Bratton's investigation, go Google "MacArthur Park Melee".
To view jerky hand-held home-movies of Police roughing up frantic grandmas with baby carriages, the blog-o-sphere is chock full of choices... Let's just talk about pure imagery for a moment.

As they stalked about in assault formation like Star Wars stormtroopers while firing weapons against unarmed civilians, I cannot help but wonder if the Police were aware of their kinship, pictorially, with two of history's most uncompromising paintings.

Whether we have stood in front of them at a museum or not, some art images get dispersed through our social consciousness by way of quirky references, half-remembered glimpses from school history books, or goofy lampoons. 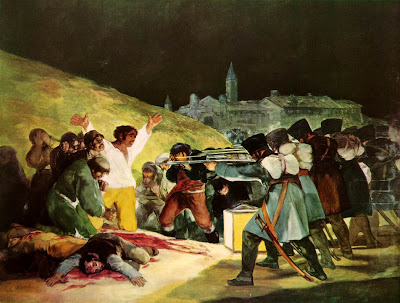 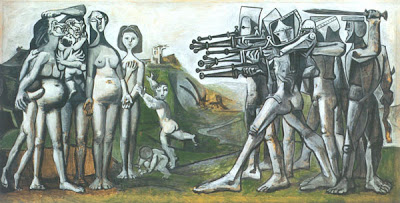 Then there is Pablo Picasso's twentieth century homage to Goya, depicting "any war".
In corny cubist fashion, Picasso creates a similar gaggle of armored soldiers who prepare to violate a crowd of defenseless women and toddlers. History repeats itself. Both artists were witness to the horrors of war and inhumanity, and both artists rose above the simple act of painting in order to comment on the universal evil that rears it's head from time to time. Somewhere, somehow, we know these images and bristle accordingly when we see such a scenario reenacted in reality... especially in our sunny city parks.

After talking to a number of youths who attended the well-documented May Day March, I found that their outrage was not only fueled by the authentic spectacle of police brutality, but also by the archetypal inhumanity of the scenes before their eyes. Goya and Picasso ( along with many great and courageous artists ) leave us their stinging paintings as diagrams to educate and remind us that there is no defense for those who strike poses of oppression.

Some public-relations specialist decided decades ago that the catch-phrase "...To Protect and to Serve" should be written upon the side panel of every Los Angeles Police squad Car. It was a public relations recipe that has been effectively undone, easily eclipsed by the overwelming power of the image. They will never have that recipe again...